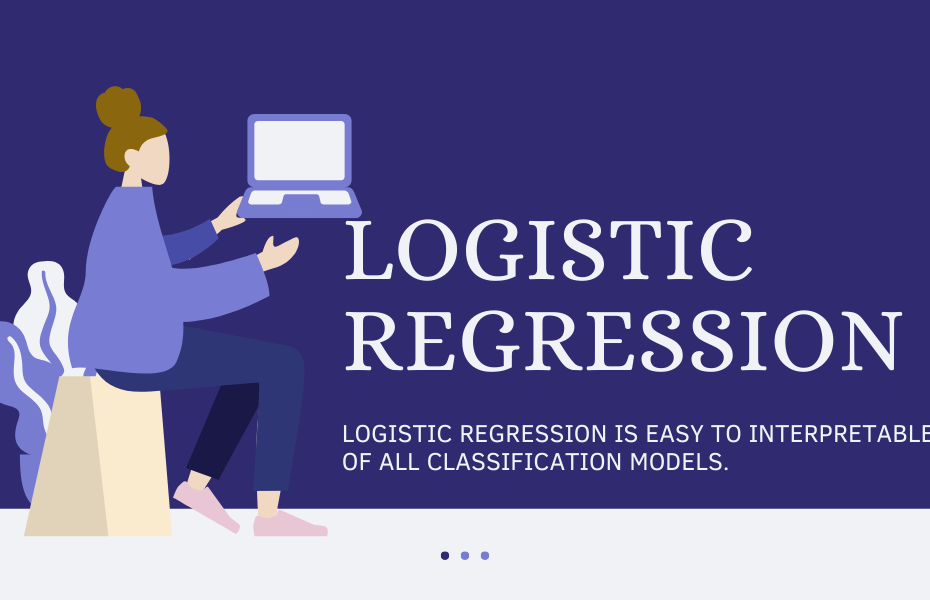 Welcome, to the section on ‘Logistic Regression’. Another technique for machine learning from the field of statistics. In the linear regression model used to make predictions for continuous variables (numeric variable). Logistic regression is a classification model. It will help you make predictions in cases where the output is a categorical variable.

Logistic regression is easy to interpretable of all classification models. It is very common to use various industries such as banking, healthcare, etc.

The topics that will be covered in this section are:

We will look at all these concepts one by one. Also, if these terms sound a little alien to you right now, you don’t need to worry.

In this logistic regression, multiple variables will use. As we can see there are many variables to classify “Churn”.

In the classification problems, the output is a categorical variable. for example,

Take the example from Table-1

We need to predict a person is diabetic or not. So now we have plotted the blood sugar on the x-axis and diabetes on the y-axis. As we can see in the 1st image. Red points show non-diabetics and the blue point show diabetic person.

We can decide based on the decision boundary as we can see in image-2 (top right). We could say that all person with sugar level more the 210 is diabetics. And the patient with less than 210 sugar level is non-diabetic.

So in that case out prediction represents a curve shown in the image-3 bottom left. But there is a problem in this curve we misclassified 2 points. So now the question is, Is there a decision boundary that helps us with zero is classification. Ans is there is none.

The best case would be the one with a cutoff around 195 in image-4 (bottom right), So there would be one miss classification.

There is a problem with this approach, especially near the middle of the graph. We can not cutoff based on some assumptions. It will be risky. This person’s sugar level (195 mg/dL) is very close to the threshold (200 mg/dL). Quite possible that this person was a non-diabetic with a little high blood sugar level. After all, the data does have people with little high sugar levels (220 mg/dL) (image-4), who are not diabetics.

We saw an example of a binary classification problem. Where a model is trying to predict whether a person has diabetes or not based on his/her blood sugar level. And we saw how using a simple boundary decision method would not work in this case.

So one way to overcome this problem of sharp curve, with probability.

We want the person probability of (red points) low blood sugar would be very low. And the blue point where the blood sugar level is very high, we would like to have a high probability.

And for an intermediate point where the sugar level in the range is not high and low. There we would like to have the probability close to 0.5 or 0.6.

So one possible curve, which called as a Sigmoid curve as show bellow.

So, the Sigmoid curve has all the properties you would want. Low values in the start, high values in the end, and intermediate values in the middle. It’s a good choice for modeling the value of the probability of diabetes.

You may be wondering why can’t you fit a straight line here?

This would also have the same properties. Low values in the start, high ones towards the end, and intermediate ones in the middle.

Because the main problem with a straight line is that it is not steep enough. In the sigmoid curve, as you can see, you have low values for a lot of points. Then the values rise suddenly, after which you have a lot of high values.

In a straight line though, the values rise from low to high very along with the line. And hence, the “boundary” region, where the probabilities transition from high to low is not present.

So, by varying the values of β0 and β1, you get different Sigmoid curves. Now, based on some function that you have to minimize or maximize, you will get the best fit Sigmoid curve.

Now for the other points like p5,p7,p8,p9,p10. The probability of these people being diabetics value as large as possible.

There is another way to interpret p4 value.

For example, if we say We want to minimize p4 value, at the same time we can also say we want to maximize (1-p4) value. Both interpretations are the same.

So, we can extend this opinion and we will maximize the other value.

So, the best fitting combination of β0 and β1 will be the one which maximizes the product:

This product is called the likelihood function

So we can manipulate the shape of the sigmoid curve with different values of β0 and β1. So far, you’ve seen this equation for logistic regression:

So what we need to do, simple we can simplify this equation.

This code is a demonstration of Univariate Logistic regression with 20 records dataset.

In python, logistic regression implemented using Sklearn and Statsmodels libraries. Statsmodels model summary is easier using for coefficients. You can find the optimum values of β0 and β1 using this python code.

In the next blog will cover the Multivariate Logistic regression. And will see how we can overcome the customer churning in Telecom industries.

We saw why a simple boundary decision approach does not work very well for diabetics example. It would be too risky to decide the class boundary on the basis of the cutoff. Because, especially in the middle, the patients could belong to any class diabetic or non-diabetic.

Hence, we saw that, it is better to talk in terms of probability. One such curve which can model the probability of diabetes very well is the Sigmoid curve.

It really helped me learn the concepts. Thanks a lot.